Since 1989, The Simpsons have been making us laugh and redefining comedy and satire. But as we all know, the earlier seasons not only gave us sheer hilarity and biting social commentary, it also  gave us some of the most heartfelt and tear-jerking moments in television. And I’m going to bring out the tissues while counting them down today (actually, it’s very unlikely I’ll get teary since I’m a total robot when it comes to crying in movies and TV shows. Just ask my boyfriend).
The only rule for this list is I have to have seen the episode in it’s entirety for the moment to qualify. Obviously there’s spoilers for the two of you out there who’ve never seen the show, but I’m going to assume if you’re reading this, you’ve seen the show too many times to count. Anyhow, prepare yourself to cry all over again, as we count down the Top Ten Touching Simpsons Moments.

In this classic from Season 4, Lisa becomes highly insecure about her looks after an unflattering caricature. Homer, eager to prove to Lisa how beautiful she is, decides to enter her in the Little Miss Springfield beauty pageant. However, he can’t afford it, so he sells his winning ticket for a ride on the Duff Blimp.
The scene where Homer looks in his wallet and sees a picture of Lisa beside the ticket is one of the most lovely images in The Simpsons history. He chooses his daughter’s happiness over something material that meant the world to him.
Homer gets criticised both on and off screen for being a bad father. But this is one of many shining examples of Homer showing how loving he truly is. It’s summed up beautifully at the end.

Lisa: Do you remember why you entered me in that pageant?
Homer: I don’t know. Was I drunk?
Lisa: Possibly. But the point is you wanted me to feel better about myself. And I do.
Homer: Will you remember this the next time I wreck your life?
Lisa: It’s a deal 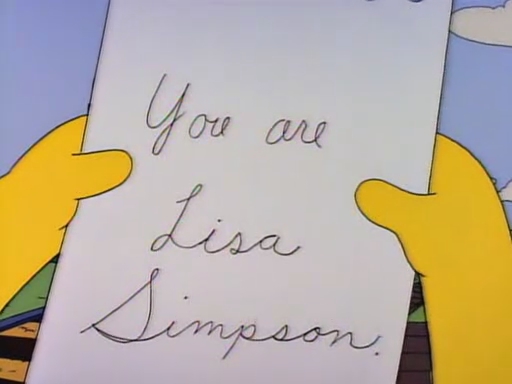 I’ve put this one pretty low on the list since I talked about it on my Top Ten Episodes blog, but it really is a gem in the show’s history. The scene where Lisa says goodbye to Mr Bergstrom, the only person to ever truly understand and encourage her is genuinely heartbreaking. She feels that her life will have no meaning without his validation. But Mr Bergstrom says “When you feel like you’re alone, and there’s no-one you can rely on, this is all you need to know,”

You are Lisa Simpson.
We all know Lisa is one of the best characters on the show but this was the first time she’d been given the assurance that she is enough.
Every time the episode plays, there’s not a dry eye in the house. Except me. Because I’m a robot. 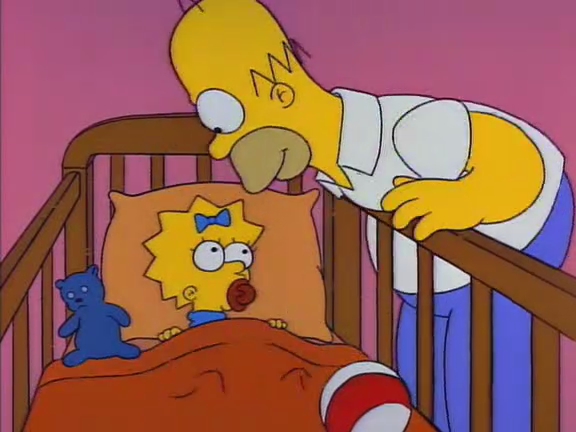 Bemoaning Maggie’s inability to talk, Marge decides to tell the story of Lisa’s first word. It turns out Bart had a serious case of jealousy when Lisa was born, but this changed when Lisa’s first word is “Bart”.
There’s a number of classic moments in this episode. America winning the Olympics, the gymnast landing on a broken leg, Bart staying at the Flanders’ house, then trying various schemes to get rid of Lisa. Personally my favourite is the terrifying clown bed Homer builds to please Bart.  But as great as the episode is, that’s not why we remember it. See, both Bart and Lisa called their father ‘Homer’ as infants, something which always bothered him. But in the last few seconds, Maggie is the one to finally call Homer what he always wanted: Daddy. It’s simultaneously heartfelt and infuriatingly sad, since Homer never hears it.
But maybe in the end that’s what makes it so memorable. We keep coming back to the episode hoping it will have a different outcome. It never changes but still gives us a moment we will never forget.

Homer is arrested for a DUI and Marge persuades him to give up beer for a month. Homer faces terrible temptations and attends Alcoholic Anonymous meetings only to be kicked out, but manages to keep his promise to remain sober.
Of course, there’s a very funny side plot involving Lisa testing and unknowing Bart’s intelligence against a hamster, but the heart of Duffless is the relationship between Homer and Marge. At the end of the episode, Homer eagerly rushes back to Moe’s, ignoring Marge’s request for a bike ride. However, once he sees what his alcoholic friends have been reduced to, he decides to join Marge for a bike ride after all.

This moment gets overlooked a lot, but it’s a very beautiful scene. No words necessary, just a really lovely example of Homer putting his wife first, and it leads to one of the most romantic moments in The Simpsons.

I’ll admit it’s not my favourite episode, but it’s still one I have a lot of respect for. Bart, having failed too many times, is told he may have to repeat Year 4 (4th grade for any American readers). He studies insanely hard to the point of practically torturing himself, and even appeals to God for a blizzard so he has one more day to study. But despite everything, he doesn’t appear to pass his exam.
Bart’s resulting devastation is probably the saddest thing you’ll ever see on The Simpsons. He truly works his hardest and still doesn’t succeed (I’m aware there’s a happy ending, but let’s leave that for now). This is a very hard lesson to learn and there is zero sugar coating of it here. It’s not heightened, it’s not surreal. It’s a tough slice of reality. We see the struggle Bart goes through, we feel the bitter disappointment of failure despite his efforts and we rejoice at his eventual triumph. 33 million viewers went through it for the first time on October 11th, 1990. As of 2016, Bart Gets an F remains the highest rated episode of The Simpsons.

Halfway through the list with plenty more tear-jerking moments to come!

This site uses Akismet to reduce spam. Learn how your comment data is processed.