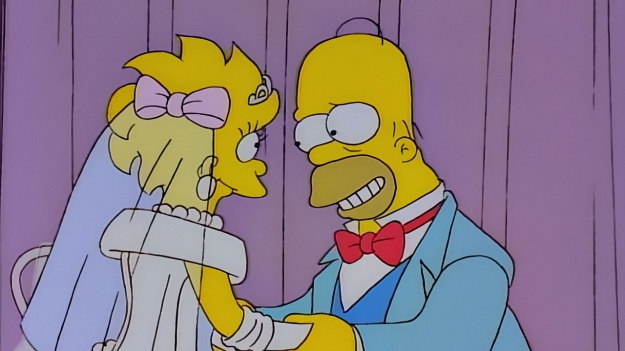 How could I not put this entire episode up? I can’t pick just one moment from Lisa’s Wedding. They’d take up half the list.
Lisa runs into a fortune teller at a medieval fair who tells her the tale of her apparent first love. In 2010, Lisa becomes engaged to the charming Hugh Parkfield. Hugh tries to fit in with the Simpson family but is continually injured, annoyed and genuinely frightened by them. However, once Lisa discovers Hugh plans to move back to London, essentially cutting Lisa off from her family, she is completely outraged and calls off the wedding.
Everything about this episode is done perfectly. The framing device of a fortune teller, The Simpsons’ version of what the future might look like (they got Skype somewhat right!), Maggie being a talented singer and chatterbox that we still never hear talk. Every reveal of what happened to the characters is a riot, particularly the revelation that Martin Prince has become the Phantom of the Opera. Hugh, voiced by acting legend Mandy Patinkin, is a very enjoyable character. Granted, he isn’t the nicest guy, but you really sympathise with his reactions to the Simpson family and he has some good lines here and there. It’s an extremely funny episode because of the subject matter and the choices they make in telling this story.
However, what makes this episode stand out as one of The Simpsons’ finest is Lisa’s fierce loyalty to her family, and how she would never abandon them no matter how much irritation they cause her. The scene between her and Homer is absolutely stunning and heartfelt. But the line that sums up Lisa best in this episode is an exchange between her and Hugh.

Hugh: But Lisa, you’re better than this place. You’re like a flower that grew out of a pot of dirt.
Lisa: That’s a horrible thing to say!
Hugh: Oh come on. You complain about them more than anyone.
Lisa: Maybe, but I still love them. And I don’t think you understand that.

Any way you slice it, Lisa’s Wedding is one of the most emotional and memorable episodes ever and more than earns its place on the list. 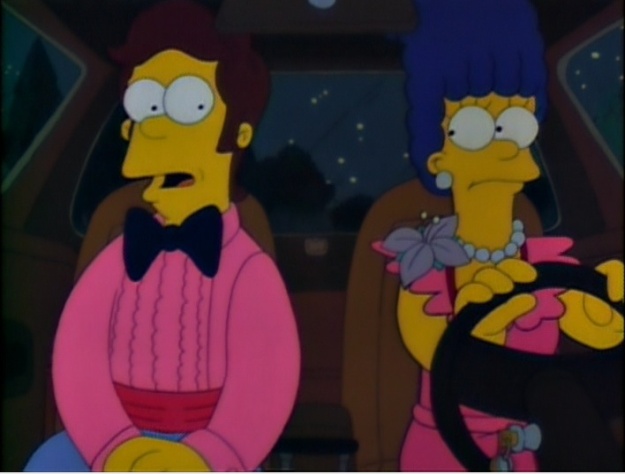 The family’s beloved TV blows up, so they pass the time by telling the story of how Homer and Marge met.
Homer and Marge met in high school, where Homer pretended to be in need of Marge’s tutoring in order to get to know her. Once Marge discovered the deception, she went to the prom with resident genius Artie Ziff. However, after the festivities Artie wouldn’t take no for an answer, leading Marge to realise who she should have chosen as her date. What follows is a simple scene of beautiful romance.

Marge: Why so glum?
Homer: I’ve got a problem. As soon as you stop this car, I’m going to hug you. And kiss you. And then I’ll never be able to let you go. (Cut to the present) And I never have.

Wondering why there are no photos of Maggie in the family albums, Marge and Homer tell the story of Maggie’s birth.
Homer quit his hated job at the power plant to take up his dream role of working at the local bowling alley. However, while ‘celebrating’ their new life, Marge became pregnant with Maggie, forcing Homer to return to the plant. As punishment for quitting in the first place, Mr Burns installed a demotivational plaque at Homer’s workstation reading DON’T FORGET: YOU’RE HERE FOREVER.
However, when Maggie was born, Homer was enraptured by his daughter. It’s revealed that he has all her photos at work, strategically placed over the plaque so it reads DO IT FOR HER.
This is definitely one of the most famous moments in the entire series and for good reason. For all Homer’s flaws and stupidity, he truly has a lot of kindness in his heart. This is also an episode which shows real life struggles. Having to support a family. Making sacrifices for the good of those around you. Sometimes you have to work a job you don’t like because it’s the only option. There’s no rosy ending here. Homer has to live with the situation, but still finds the motivation and joy to keep going in his daughter. Definitely worthy for the third spot on the list.

Lisa discovers she is failing gym class at school. Desperate to avoid failing, she tries her hardest at junior sports. She discovers a natural talent for ice hockey and quickly becomes the star player of the Kwik-E-Mart Gougers. However, Bart is the star player on the opposing team, the Mighty Pigs. Homer’s favouritism and overall idiocy pins the two siblings against each other until they have to face off in the final game.
Of course this episode is hilarious. Homer is at his douchebag finest, there’s the iconic fist fight between Bart and Lisa and Ralph Wiggum’s unforgettable quip (Me fail English? That’s un-possible). There’s plenty more jokes I could mention, but that’s not why we love this episode. We love it because of the ending.
After spending the entire episode at odds, Bart and Lisa come to the final, deciding shot of the game. The entire crowd is screaming for blood. But then, Bart and Lisa begin to remember all the times they shared when they were little. They both step aside and the match is declared a draw.
Again, this is why we love this show. We can laugh at and relate to it. Bart and Lisa may be very different people, but they are siblings first and foremost and share a very fierce bond. The scenarios shown in the montage are all very simple and sweet, and it’s all done through music and visuals. In the end, they make the big choice and decide their relationship is more important that who wins. It’s a case of blood being thicker than water, or rather, a petty sports match.
Of course, the hilarity with the ending is how the town riots over a mere children’s hockey game but again, that shows the maturity and love between Bart and Lisa, and gave us the moment which still tugs at the heartstrings.

Before I unveil the top pick, here are a few honourable mentions. 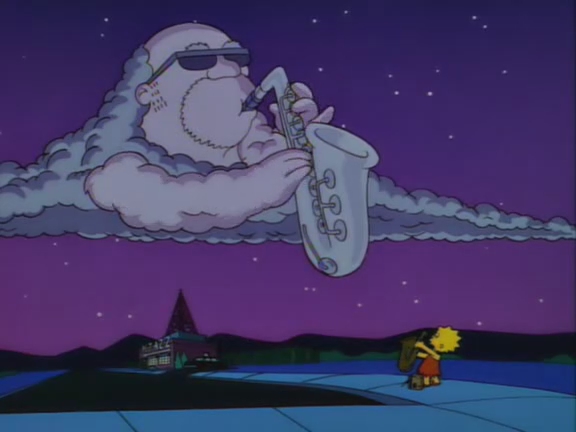 Homer’s long presumed-dead mother Mona returns to Springfield after being on the run for many years. In the 60s, Mona was part of a hippie group which destroyed Mr Burns’ germ warfare lab. Mona was the only one to be identified as a suspect and was subsequently forced into hiding to protect her family. The whole family and especially Homer embraces Mona with open arms. But when Mr Burns discovers Mona’s whereabouts, she’s once again forced to the underground.
As if I even need to go into much detail. This moment is so famous it’s still talked about. Homer’s goodbye to his mother is nothing short of iconic, and the dialogue is some of The Simpsons’ finest writing.

Homer: At least this time I’m awake for your goodbye.
Mona: Oh Homer. Remember, whatever happens, you have a mother, and she’s truly proud of you.
Homer: Don’t forget me!
Mona: Don’t worry Homer. You’ll always be a part of me. (Hits head) D’OH!

Glenn Close is of course perfect as the guest star, and it’s fun to finally learn a few secrets, such as where Lisa’s intelligence comes from. But that final shot of Homer staring at the sky is seared into our memories. Even the production team decided no promotions should be played over those credits because the moment was so touching. This was absolutely the right choice.
For all these reasons and more, the ending of Mother Simpson earns the top spot.

Next Week: Is RENT a masterpiece?

This site uses Akismet to reduce spam. Learn how your comment data is processed.